From Father to Son 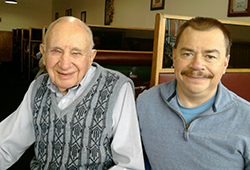 Don Horton is a man who wants to have his cake and eat it too. That’s why he loves Salvation Army Charitable Gift Annuities. Throughout his life, Don has found that it is possible to give to others and still receive benefits for himself.

When Don finished high school, his father followed a call to go to seminary and Don was left in charge of the family farm. Don didn’t think twice about making this sacrifice and soon he was informed that he missed the WWII draft because of his agricultural status.

Several years later, Don was drafted for the Korean War. He had the opportunity to defer but he felt it was his duty to leave the comfort of home and enlist. Don was expecting to serve in the infantry. However, his typing skills earned him a position as a clerk under the command of General MacArthur, in Tokyo Japan. Eighteen months later Don safely returned home and worked in a wax factory. After several years he began his own carpet cleaning company and eventually sold it to his son, Larry.

Larry continues to run the business and has even set up his own gift annuities. “I am glad that I can continue in the footsteps of my father,” said Larry. “A Charitable Gift Annuity is a good financial plan that benefits others and yourself.”

Don has not only passed on a heritage to his son but he has passed on a financial legacy that will touch many people for years to come (Don designated his recent annuities to benefit Salvation Army Children’s Camps). He said, “You can have your cake, share it and eat it too. Giving of yourself has a way of paying you back.”