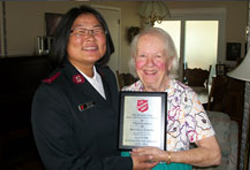 Her generosity is also touching the next generation. Her son is self-employed with no pension, so she has started several gift annuities which give her, and then him, lifetime income backed by all of the Army's assets. Bertha says, "I know that The Salvation Army is a safe organization to give to and I can trust them to make payments for me and my son. It's satisfying to know that my gifts will be helping many people."

One of Bertha's favorite verses is Proverbs 22:9: "A generous man will himself be blessed, for he shares his food with the poor." Bertha adds, "I know that through The Salvation Army that I'm providing food for both the body and the soul."

Three generations of Bertha's family have been touched by gift annuities. The benefits that you gain from a gift annuity may be different from Bertha's. Click here to see how a gift annuity can work for you.